What you dont know about your chimney can hurt you, especially if you have a gas-heating appliance that uses your masonry chimney as a venting system. Every day, without any visible signs, acid produced by your gas appliance may be eating away at the inside of your chimney. The resulting damage can compromise the safety of your family and the value of your home. But a thorough annual inspection of your chimney, as recommended by the National Fire Protection Association and the Chimney Safety Institute of America, can alert you to potential problems before they become costly dangerous.

Most homeowners are aware of the need for chimney cleaning and inspection if they own a wood-burning stove or regularly use their fireplace. But many dont realize that a gas heating appliance, whether it is a furnace, boiler or even a hot water heater, relies on the chimney for proper venting of the exhaust. Appliances fueled by natural gas or propane may not produce the visible soot that appliances burning other fuels do, but they can deposit corrosive substances in your chimney. In many cases, these acids may wreak havoc on your chimney without producing any external symptoms until the problem has become dangerous or expensive to repair.
The best safeguard is annual inspections
Gas heating appliances are one of the most popular choices for home heating in many areas of the country. Natural gas is an inexpensive fuel and new. Higher efficiency appliances help keep fuel consumption down. With new natural gas pipelines being put in across the country, this economical option is becoming available to more people. The combination of an inexpensive fuel and a higher efficiency appliance is great for youre your wallet. But in order to work as safely and efficiently as possible, gas appliances must meet specific venting requirements.

If the chimney was not inspected at the time the appliance was installed, it is important to have the chimney-heating appliance relationship checked out. Evaluations are especially important when older chimneys are paired with higher efficiency appliances and boilers (those with efficiency ranges above 80 percent), but are also important with new chimneys and older heating appliances. (Alliances with efficiency ranges of 90 percent do not require vertical vents and are vented horizontally through an outside wall).
Venting Considerations

Todays higher efficiency appliances use most of the heat that is produced by combustion to heat your home. Every homeowner wants to prevent heat that could be used to warm the home from escaping up the chimney. What many dont realize is that some amount of heat is necessary in order to provide the draft that makes a venting system work. Because there is less heat in the venting system with higher efficiency appliances, the heating and venting system must be properly matched in order to achieve the safest and most efficient operation. Improper matches often occur when flues or the connector pipes are too large.

Gas is widely marketed as a clean-burning fuel, and under optimum conditions. However, in order to burn the gas, your heating appliance must take in air for combustion. The same acids in the air that cause acid rain may also be present in the air your heating appliance takes in. The air may also carry chlorides that are often picked up from household cleaning products or other pollution. When chlorides combine with water, hydrochloric acid is formed. Other acids may form if water mixes with residues in the flue, or with other air-borne pollutants.

Eventually, corrosion caused by water condensing inside the flue could cause the liner to crumble. Debris from the liner could create a blockage in the chimney that could prevent carbon monoxide from leaving the system and allow it to enter your home. If the chimney is unlined or in poor condition this is especially dangerous.
Information on the Importance of Draft
A proper heating appliance/venting system match will help ensure adequate draft in the system. Draft is important for a number of reasons. Inadequate draft can reduce the efficiency and safety of the appliance. Complete combustion requires oxygen (combustion of one cubic foot of natural gas requires more than 10 cubic feet of air to provide sufficient oxygen. Adequate draft ensures that enough air is pulled into the appliance for complete combustion.

Anything that interferes with the draft can cause more moisture to remain in the flue. Sometimes the chimney flue is too large for the appliances venting requirements, giving the gases more opportunity to cool and condense inside the flue. An exterior chimney, because it is cooler, will make the problem worse. The same problems can also rise if the connector pipe that joins the appliance and the chimney is too long, or if there are too many bends or elbows in the venting system. Any of these situations could allow moisture to condense inside the flue instead of being carried out of the venting system.
Symptoms
Although your chimney may be suffering from an improper heating/venting match without producing any visible symptoms, sometimes the excess moisture produced causes visible results. Any of the following symptoms could point to a venting system that is not matched to your heating system:
Safety Information 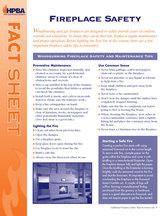 Although older chimneys are more likely to suffer, new chimneys are not impervious to the damage that may occur in venting gas appliances. Whether the chimney in your home is old or new, the National Fire Protection Association and the Chimney Safety Institute of America recommend annual evaluations of all chimneys, no matter what type of appliance they vent.

There are some chimney liners that are not compatible with gas appliances because of the material from which they are made. It is important to make sure that the lining system you purchase, or even the one that may currently be in your chimney, is appropriate for use with gas appliances.

Make sure that your furnace was installed according to the manufacturers installation instructions and the National Fire Protection Association Standards. The two most important NFPA standards that apply to gas appliances are NFPA 54 and NFPA 211. Your appliance installation manual should give you all the necessary information.
Locations
Wilmington | (302) 658-5186
Rehoboth Beach | (302) 727-5643
Close [x]