Here are some simple scientific fundamentals 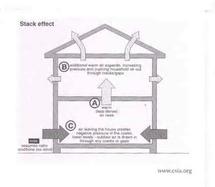 Here are some simple scientific fundamentals to explain how and why a chimney works or maybe why it doesnt. You can use this information to diagnose smoking or odor problems with your chimney. The air in your house is constantly in motion, even though you cannot see it. In general, airflow tries to flow out of your house in the upper parts, and makeup air tries to flow into your house in the lower parts of your house. Thinking of your house as a system makes it easy to understand the reasons for that airflow. The actual flow of air into and out of any home is influenced by a number of constantly changing factors, including: stack effect; wind loading; interior mechanical systems and fuel-burning appliances such as furnaces, fireplaces, wood stoves and water heaters.

Homes built in the past 25 years, and older homes that have been retrofitted, have been made more and more airtight. This makes it more difficult for makeup air to enter the home. 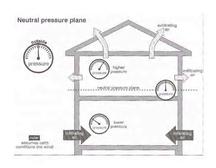 Hot air rises and so does the warm air in you home. When the warm air rises to the upper areas its called the "Stack Effect". That trapped air creates a pressurized area and forces its way out through very small openings such as light fixtures and window frames. At the same time replacement air is trying to enter in the lower part of the building to make up for the escaping air.

Somewhere in your house, amid all this airflow, is something called the Neutral Pressure Plane (NPP). Above this theoretical plane, the air pressure is slightly positive compared to the outdoor air pressure and is trying to force its way out of the house. Below the plane, it is slightly negative and the house is trying to draw air in. The location of the NPP can constantly change in response to changing conditions. All the factors that affect airflow in the house also influence the level of the Neutral Pressure Plane. Anytime a fireplace or fuel-fired heating appliance (except direct vent) is below the plane, air will tend to flow into the house through the chimney or vent. A common example of this is found in homes with two fireplaces, one below the other. As the upper level fireplace uses air for combustion and chimney flow, it depressurizes that level slightly causing air to flow upwards from the lower level. Since the lower level fireplace is below the NPP, it draws air into the basement through the chimney. Unfortunately, since those two flues generally exit the chimney close to each other, the makeup air can contain some smoke from the fireplace above and can pick up unpleasant chimney odors as it passes down the chimney flue.
Wind-loading 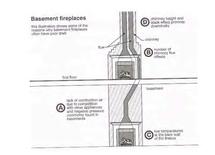 Wind-loading is the effect on interior house pressures caused by the wind. When wind strikes a building, it creates high pressure on the side that it hits and low pressure on the downwind side. Any open windows or doors on the windward side will help to pressurize the house, increasing chimney draft. However, openings on the downwind side will depressurize the house and increase the likeliness of back drafting from chimneys or vents. Back drafting is a reversal of the airflow in which the smoke is coming into the house instead of going up the chimney.
Interior mechanical devices
Interior mechanical devices such as clothes dryers, kitchen fans, bathroom fans, attic fans, and central vacuums can also create depressurization by removing large volumes of air from the house. The result is often negative pressure in the area of a fireplace, woodstove, or other fuel-fired heating appliance making it increasingly difficult for natural draft chimneys to function as intended.

A forced-air furnace is another mechanical system that commonly removes air from the house. Many such systems are out-of-balance due to leaks in the ducts. Leaky supply ducts cause air to be blown into the attic or craw space. Leaky return ducts draw air from the basement or other areas they pass through.

Furnaces, water-heaters, fireplaces, and woodstoves are examples of fuel-burning appliances that require large volumes of air for combustion. Unless they are specifically equipped to draw air in from outside the house, such as direct vent appliances, operating them can reduce the inside air pressure. There are a variety of mechanical devices in the marketplaces that help provide the necessary makeup air to balance the air pressure needs of your house system.
Draft and Flow
Draft and Flow is another way of explaining how your chimney works. The air moving up your chimney works under the same set of physical principles as water flowing in a hose or pipe.

When a fireplace chimney is full of hot air, it actually pulls air though the firebox. This pulling effect is called draft and it corresponds to the amount of pressure in a water hose. The only difference is that the air pressure is negative and the water pressure is positive, like using a straw to drink with instead of to blow bubbles. Thus, a chimney is called a negative pressure system. Increasing the draft in your chimney is like opening the faucet wider on the hose. The simplest way to increase the draft in your chimney is to burn the fire hotter. The hotter air is lighter, so it has more pull. Another way to get more draft is the increase the height of your chimney, except when the chimney is already so tall that frictional forces negate the effect of the extra height.

Given the same amount of pressure, a larger pipe can carry a greater volume of water than a smaller one. The same is true for chimneys. With the same amount of draft pressure, a larger flue will exhaust more smoke from your fireplace than a smaller one. But just as a water hose can be kinked or plugged, the airflow in your chimney can have a restriction that slows down the smoke flowing up the chimney. Some reasons for poor flow in a chimney are: excessive creosote deposits; closed or plugged dampers; improper construction; structural damage or even a dirty chimney cap. Having a plugged-up chimney cap at the end of your chimney is just like having a closed nozzle at the end of a hose. Air will not be able to flow though the chimney. Let a NFI Certified Chimney Sweep technician from Wertz and Company Inc evaluate your chimney and recommend any corrective action to ensure that it is capable of the proper draft and flow.
Locations
Wilmington | (302) 658-5186
Rehoboth Beach | (302) 727-5643
Close [x]